HEAT conducted on-road remote sensing emissions testing surveys in 2014, 2016, and 2018 for Applus Technologies and the State of Connecticut Department of Motor Vehicles (DMV) as part of their biennial reporting to the USEPA, as specified in 40CFR §51.351 and §51.371. The EDAR system is used to measure the required pollutants and collect associated data such as speed, acceleration, license plates, and vehicle type; among many other variables.

One of the unique results in the 2014 survey was concrete evidence that EDAR can measure the temperature of the exhaust gases, not the temperature of the tailpipe. Therefore, EDAR can estimate instantaneous hot running fleet mass emissions rates, while alternative remote sensing technology can only measure concentrations of pollutants. The hot running mass emission rates can be combined with the fleet pollution and vehicle miles travelled to generate a hot running emissions inventory for the entire fleet. This is used to evaluate what portion of the fleet has the highest contributions of hot running exhaust emissions by pollutant.

Additionally, HEAT has also performed the remote sensing surveys in the Phoenix inspection maintenance area in 2015, 2016, 2017, 2018, and 2019 as defined in the Arizona Revised Statute §49.541. HEAT is required to test 15,000 vehicles per inspection cycle of Arizona registered vehicles as part of the requirement of CFR §40-51.351(b) for enhanced inspection maintenance. HEAT deploys the EDAR system utilizing a specialized transportable mount system at an average of six to eight temporary locations around the Phoenix area each year to collect emissions measurements. HEAT has completed the collection and analysis for these surveys and will be performing this work again in 2020.

Furthermore, HEAT holds a contract for Technical Services in the state of Arizona as well. The goal of this contract is to investigate emissions production from a variety of mobile sources. HEAT may be required to perform emissions testing and evaluation of various mobile sources, including a plethora of fuel types formulated for use with on-road vehicles or off-road engines, equipment, or vehicles on an on-call basis. Testing, analysis, and modeling may be required.

Types of questions the State of Arizona would like examined included:

HEAT performed the 40CFR survey for the State of Pennsylvania Department of Transportation in July 2019. According to EPA Rules at 40CFR §51.371(a)(1)(3), on-road emissions testing is not required on every vehicle or season. However, the requirement includes the testing of at least 0.5% of the subject vehicle population, or 20,000 vehicles; whichever is less. In the case of Pennsylvania, 20,000 vehicles is less. The on-road survey is required to test 20,000 vehicles per inspection cycle of valid remote sensing records of Pennsylvania registered vehicles out of its normal periodic testing cycle, for Hydrocarbons (HC), Carbon Monoxide (CO), Nitrogen Oxides (NOx) and Carbon Dioxide (CO2). The on-road emissions testing data is then compared to the most recent periodic test data for program evaluation. HEAT is set to perform the annual survey again in 2020.

HEAT’s remote sensing units (EDAR) measure emissions as vehicles drive down the road. This allows motorists to avoid having to go to a centralized testing facility and idling in long lines for an annual inspection. A Vehicle Inspection Database contains information pertaining to pass cut-points of vehicle emissions by model year. The pass decision is based on actual exhaust readings and is then communicated to the motorist.

Additionally, vehicle owners can access a list of EDAR locations via the Express Screen TN - EDAR Nashville website. Motorists can register online after driving by an EDAR prior to their registrations expiring. If a motorist receives a pass notification, they may then renew their registration online through the Express Screen website, opting to participate in the program instead of traditional testing.

HEAT deployed the EDAR system in the Province of Ontario. In February of 2018, HEAT successfully completed a pilot program with the Ontario Ministry of the Environment and Climate Change to assess the overall emissions benefits of a remote sensing program in Ontario.

During this project, HEAT was contracted to collect 25,000 valid measurements over the course of five days at five separate locations in the Toronto area. Measurements were collected at on-ramps and a multi-lane local roadway in Ontario. The project was performed in a comparable manner to a 40 CFR survey which utilizes EDAR on a specialized transportable mount system that is moved to a different location each day. The EDAR system measured the requested pollutants and collected associated data such as speed, acceleration, license plates, and ambient conditions for the Ministry.

In June 2019, Hager Environmental & Atmospheric Technologies (HEAT) performed a remote sensing emissions testing campaign in the Flanders region of Belgium at five (5) locations over a month in the cities of Ghent, Antwerp, Bruges, and Erpe-Mere. This measurement campaign, performed over two weeks, resulted in 210,000 valid measurements, of which over 50,000 were trucks and lorries. HEAT conducted this campaign in cooperation with the Flemish Government Environment Department, the Free University of Brussels (VUB), and the Dutch Organization for Applied Natural Science (TNO).

Belgium is the first country in the history of remote sensing to set up a remote sensing system on a high-speed, multi-lane highway. During the measurement campaign, EDAR deployed on a bridge overlooking the busy E40 motorway. The speed limit on the E40 is 120kmh, and EDAR detected, with high accuracy, vehicles traveling up to 170kmh. (A video of the bridge installation is available at this link.) The unique installation proved that the EDAR system performs just as well in high-speed conditions as it does on slower city roads. In addition to the groundbreaking performance on the high-speed highway, HEAT also contributed to an extraordinarily successful Anti-Tampering Campaign, in which heavy-duty trucks were tested in real-time on-road by EDAR. During testing, if the EDAR system detected tampering based on the truck's emissions on-road, the truck was pulled over for further inspection. This extremely successful campaign using EDAR increased the Flemish Government’s success rate from 9% to over 86%. The entire collected dataset is currently under analysis for a report expected to be released later in 2020.

The Vehicle Emissions Partnership (VEP) and the Scottish Government funded a pilot deployment of the EDAR system in Scotland in March 2017 as part of their “Switch off and Breathe” campaign. Testing took place in three locations with one EDAR system over a month in the Glasgow and Edinburgh areas during the winter, exposing EDAR to challenging weather conditions such as snow, rain, and hail, but EDAR was able to successfully collect data despite the adverse conditions. Using a single unit, EDAR collected 140,000 valid reads, which provided substantial amounts of information for local municipalities to perform fleet analysis and modeling while increasing public awareness of the effects of on-road emissions. This data will also help contribute to making plans to aid in tackling issues associated with vehicle emissions and to assist in the creation of sound public policy for Low Emission Zones. During this installation, EDAR collected gas data from each vehicle, including CO2, NO, NO2, and PM.

EDAR successfully captured emissions from all vehicle types that traveled underneath the unit, including heavy-duty diesels, and demonstrated its ability to run unmanned, 24/7 under demanding weather conditions, thus further proving that EDAR operates effectively and efficiently in any season.

August 2019, HEAT was awarded a contract by Transport Scotland to implement Phase I of a remote sensing Low Emission Zone pilot program. The contract calls for the collection of 300,000 valid emissions records to be collected on-road from Scotland's trunk roads. The contract required the first installation must be completed by August 31st, 2019. HEAT mobilized quickly once awarded at the beginning of August and accomplished this task on time to complete Phase I, Part I of the program. In the second part of Phase I, the agreement required the installation of EDAR systems on gantries overlooking high-speed highways by February 2020 to complete data collection to meet the goal number of 300,000 valid remote sensing records from Scotland's trunk roads. The data collection portion of Phase I, Part II, collected over 75 percent of the required 300,000 records during Scotland’s most challenging winter weather, in a three-week time period, which ended at the end of February 2020. The purpose of this program is to trial the use of remote sensing for policing and monitoring Low Emission Zones in Scotland. The measurements from this pilot and the expertise from HEAT’s remote sensing specialists will support Transport Scotland in the implementation of a full-scale program as part of the country's air quality scheme. 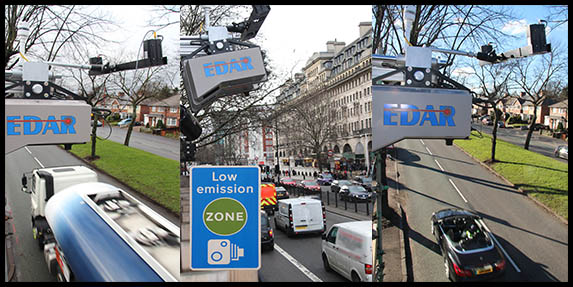 In February 2016, HEAT completed a month-long trial in the United Kingdom with deployments in Birmingham and London. This trial was performed in conjunction with the Department for Transport, Kings College and the University of Leeds to deploy EDAR on highly travelled roads in the United Kingdom to detect and quantify CO, NO, NO2, and PM from the largely diesel fleet. The collection and analysis were completed in 2016, which resulted in a peer reviewed published article and multiple presentations worldwide.

Dr. Pierre Bonnel, a senior researcher in the Sustainable Transport Unit of the European Commission Joint Research Centre (JRC) presented to European Parliament in September 2017 about the findings made in a blind validation study performed with EDAR at the Joint Research Centre in Ispra, Italy. It was determined during this evaluation that EDAR is able to distinguish Euro 0 to Euro 6 emissions standards within a given vehicle technology including diesel, gasoline, LPG, and with or without diesel particulate filters (DPF). Excellent correlations were made with EDAR under real-world conditions. The standard error between EDAR and the competing RSD technology shows that EDAR is significantly more accurate; especially with detecting low amounts of the test gases.

Click here to view the report. Please note that in the report EDAR is labeled as “RSD 2”.